Meet Hanna and Ike. They are on their first date, nervously standing, separated, on two foot-high triangular prisms, about five metres apart, upon which are neat rows of roof tiles. By the time the moo starts to rise, it’s clear that the prisms they stand on are getting smaller. Or is it that around them, all around them, something is rising?

Hanna and Ike is a short piece inspired by the question: How will the rising sea levels affect our everyday lives? Commissioned by Carlo Presotto as part of Parole Per La Terra for the Napoli Teatro Festival Italia and the Genova Science Festival, Dancing Brick was one of six European companies twinned with a scientist to help them understand and research their chosen question. Dancing Brick was in consultation with the meteorologist Luca Mercalli.

With Hanna and Ike Dancing Brick continues to explore how theatre, as an artform of the immediate, of the space, might be inspired by questions of the environment.

Hanna and Ike has been performed extensively in Italy and the UK. Please contact us if you are interested in booking the show.

“Hanna and Ike follows two emotionally inarticulate 50s teenagers on a date where they remain separated throughout by a visible on-stage chasm. Only their names betray the hurricane of emotions they do not yet have the language to express.”
The Skinny

Commissioned by the Napoli Teatro Festival Italia and the Genova Science Festival and premiered at the Convitto Nazionale at the Piazza Dante. 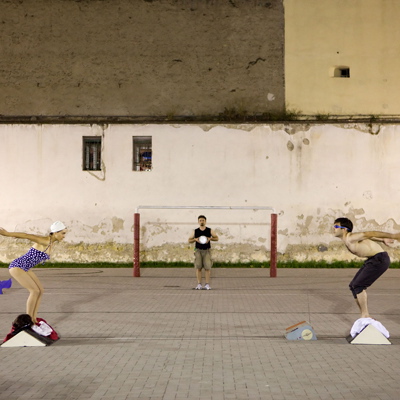